It’s not the best experience though. You need to leave your editor to see if you have any problems and if you do you need to “map” the diff to your code to find all the lines that need to be fixed. This was driving me crazy so I decided to do something about this. The idea was to show trailing whitespaces in a visible way directly in the editor as soon as you introduced them. This is actually quite easy to do for Visual Studio – you just create an extensibility project (note you have to have Visual Studio SDK installed) – New Project, Template -> Visual C# -> Extensibility and select “Editor Text Adorment – modify a few lines and you are done. It literally took me no more than 2 hours to hack together an extension that does it. It highlights all the trailing whitespaces and dynamically checks if you have any trailing whitespaces in front of your cursor when you type – if you do it will highlight them too. This is how your VS looks like if you have trailing whitespaces:

I did use this extension for the past three days (extensive QA rules!) and shared it with my colleague (the one who would before always complain about me introducing trailing whitespaces). It worked and did not feel obtrusive (granted we do not have a lot of trailing whitespaces in the projects we work on but it turned out we do have more than we thought we had). Now, if you are a crusader for trailing-whitespace-free code, you can try it too. (Actually, you can try it even if you aren’t.) I posted this extension on the VS gallery. You can just download the .vsix and double click it to install, or you can install it directly from VS by going to Tools->Extensions and Updates, selecting “Online” on the left side, typing the name (or just “Flagger”) and clicking install. 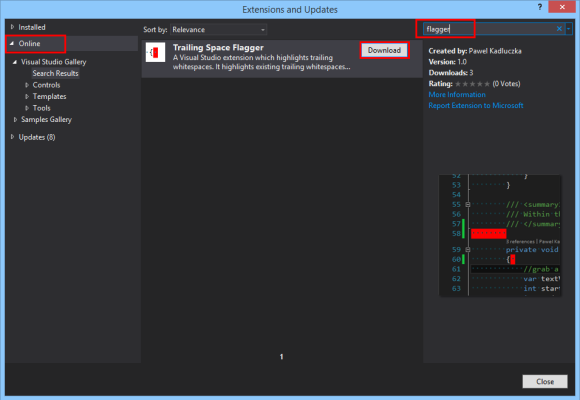 If you have too many whitespaces or just think it does not work for you you can uninstall or disable the extension by going to Tools -> Extensions and Updates find the Trailing Space Flagger in the installed extensions and click the “Remove” or “Disable” button:

As usual, the code is open source – you can find it on github.